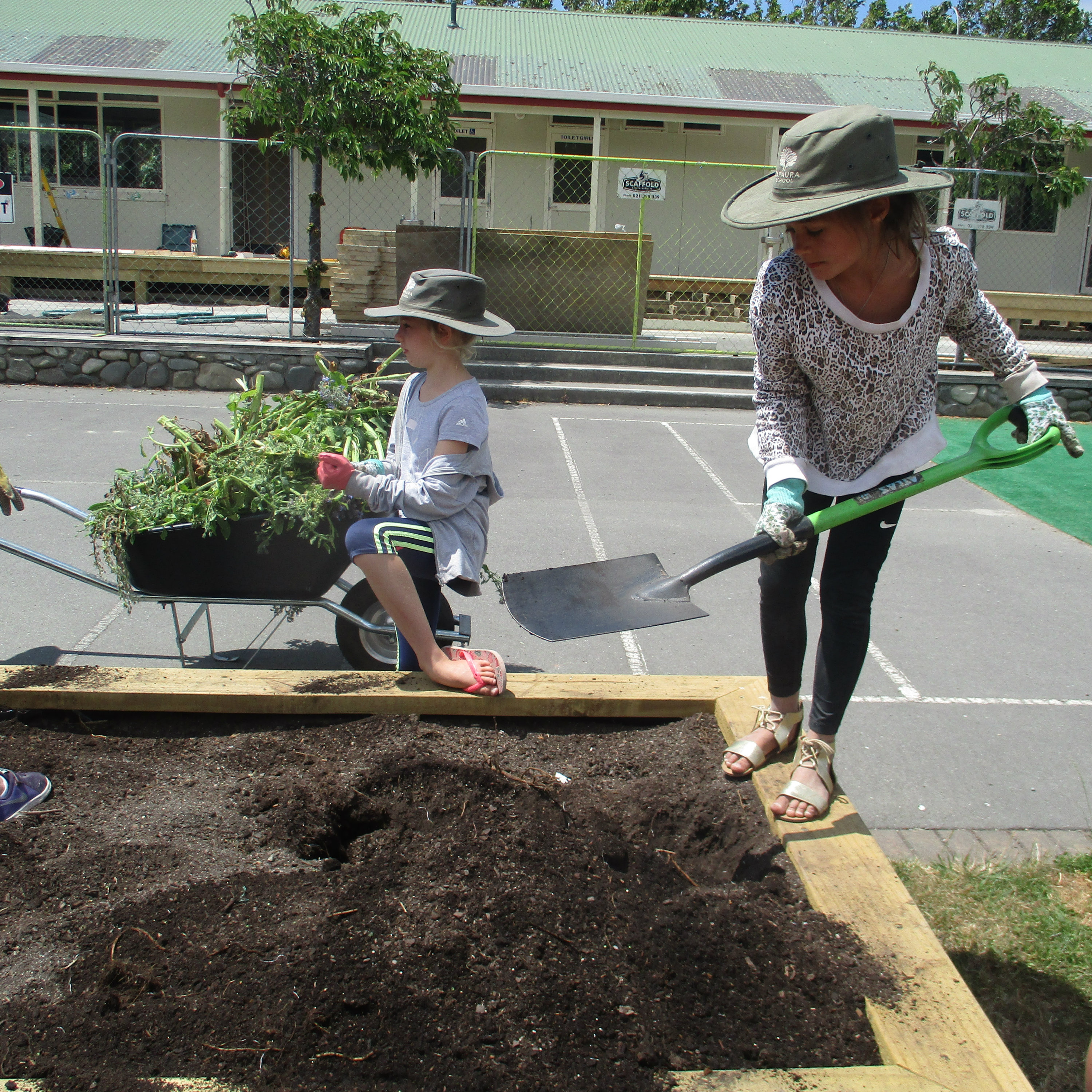 Edible gardens facilitator, Angela Wentworth, updates us on what was going on in the Rapaura School garden last term.

‘Parts of the plant’ salad

To start the term, the children from Jellyman Room went on a discovery walk through the garden to look at what was growing; tasting pak choi flowers and picking celery and lettuce for the ‘parts of the plant’ salad they were going to make that afternoon. Before heading to the kitchen, they sowed some zucchini, pumpkin and corn, learning that growing your vegetables from seed is a lot cheaper than buying vegetables from the supermarket.  Each of the ingredients of the salad came from a different part of a plant:

Mixed with a dressing of pesto and Greek yoghurt it was delicious.

Our big project for the last few terms has been constructing a new garden right in the middle of the school, where everyone can feel a sense of ownership for the garden.  The huge garden beds arrived during the holidays. The children found that the garden beds are made from treated timber.  This means the timber has been soaked in some chemicals to prevent the wood from rotting and decaying.  The chemicals are safe while inside the timber, but if they leak out, they can get into the soil, our plants and us.  A layer of black plastic prevents that from happening.  Sarah from Bunnings kindly donated the plastic and helped the children to staple and tack it on.

When the final delivery of soil for the new garden beds arrived, it was Soper Room’s job to shift it around as some beds had too much and others not enough.  It was a good opportunity to explore exactly what soil is made up of.  They discovered that sand, clay, loam, water, air, organic matter and animals are all part of a healthy soil. To take a closer look at the soils around their school, the children set up a jam jar experiment.  After filling jam jars with soil samples from the old garden, the new garden and the native garden, water was added, and the jars were given a good shake.  By the following week the soil particles had settled into layers, showing how the soil is made up.  Sand particles are the biggest and heaviest particles, so the children discovered that the bottom layer was the sand part of the soil.  As silt (or loam) particles are smaller and lighter, they sat on top of the sand particles and formed the next layer. The tiny clay particles settled in the next layer, with discoloured   water (due to dissolved rotting plant material) on top of that.  Finally, at the top, there was floating organic material which hadn’t fully rotted.  They found a lot of organic material in the old garden’s soil and much to their surprise, even more in the new soil.  The native garden had very little.  Despite the high level of organic matter in the new soil, there seemed to be very little insect life.  They decided to plant a green crop and dig in borage cuttings to encourage insects into the new garden beds.

Ending the term and the year on a high, garden themed games were set up for an afternoon of fun.  The most anticipated part of the afternoon was weighing the potatoes that each class had been growing in buckets. With lots of crossed fingers, each bucket was tipped out and the potatoes weighed.  Coleman Room were the winners, for the second year in a row, growing the heaviest bucket of potatoes.